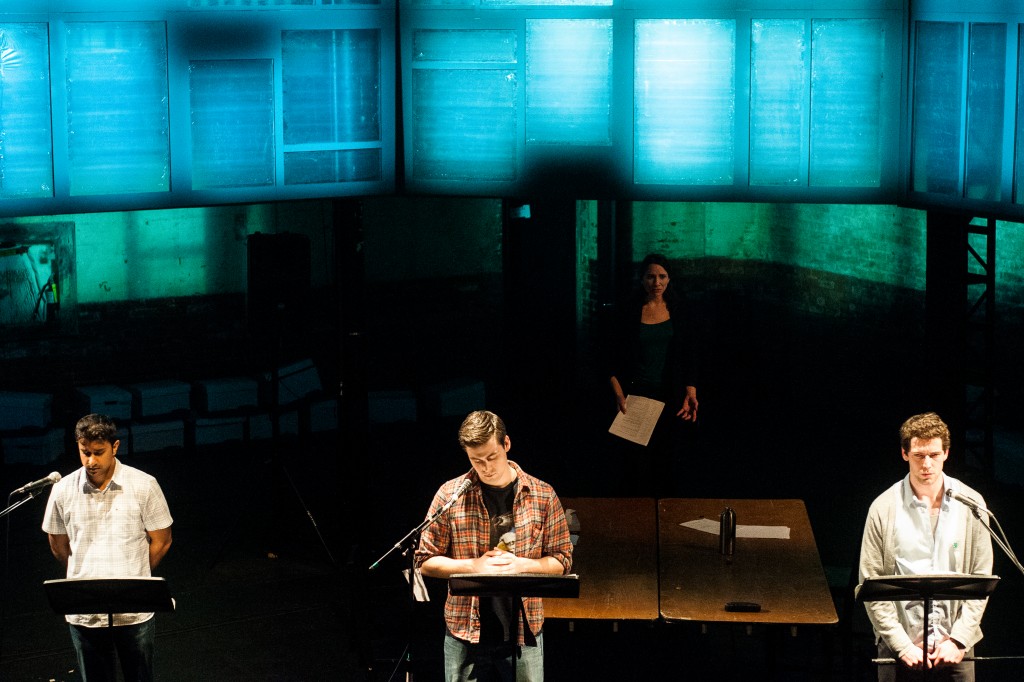 “Out The Window is fascinating…” –  Kelly Nestruck

“.. an important piece of theatre… It should  be seen” – Lynn Slotkin

“The beauty of this play is the absence of a linear line. Balkan as a playwright is very unpredictable… One presumes the outstanding use of video is also Schwellnus’ contribution with its judicious mix of text and graphics…This unconventional approach, plus an excellent video component, make for a very disturbing play…Let’s hope that someone picks up this play for a long run.” – Paula Citron

“Docudrama can sometimes be dry theatre, but Out The Window, both well structured and well performed, strikes a nerve… Balkan spreads a wide net that examines the police, the SIU, our mental-health care system, accountability and the shifting nature of memory… Out The Window has a raw, powerful quality that distinguishes it from most other theatre: it will leave you with questions rather than answers.” – Jon Kaplan (NOW Magazine)

“Incredibly powerful, edge-of-your-seat stuff….This is art that heals and transforms. It is art that connects our community…Liza Balkan’s long, hard work is extraordinary. That the audience is included in such a public forum is vital.” – Mooney on Theatre

Out The Window Features

How a horrific event became my biggest learning curve:

Out The Window is a documentary project I created and directed that investigates memory, policing, witnessing, accountability, perspective, mental health, law and theatre. Its creation was inspired by my having witnessed the death of a mentally ill man during an altercation with the police in the west end of Toronto in 2000. The show integrates verbatim court transcripts, sound, video and text derived from interviews with top lawyers from both sides of the bench, as well as with journalists, activists, artists, police force members, a police psychologist, mental health experts and family members of the deceased.

Out The Window began as a solo performance installation at Factory Theatre’s Lab Cab Festival. This was an artistic response to this horrific event and its aftermath and a way for me to begin to try to make sense of it. This showing lead to an invitation to develop the project as a Resident Artist at The Theatre Centre in Toronto. Scenographer Trevor Schwellnus, sound designer Thomas Ryder Payne and Lighting designer Michelle Ramsay all came on board as collaborators. It saw many twists and turns and growing pains through the deeply rewarding process towards finding its voice and form.

In 2012, Out The Window, with a cast of 8 that included RH Thomson, David Ferry and Julie Tepperman, played to sold out and SRO houses at the Theatre Centre. It employed active audience involvement, as it strived to create a thrilling theatrical forum to investigate a highly charged and provocative subject.

The verbatim text for Out The Window’s 25 minute second act was culled from an extended luncheon I had organized with the two key opposing lawyers. I invited 6 audience members to join the table. They all were served by “waiters” who were, in fact, the actors playing the officers during the rest of the play. These volunteer participants, newly chosen prior to each performance, became more active witnesses to this conversation. Toward the latter part of the scene, they had an opportunity to respond, if they chose, to a question or two offered by the lead actors. A brief, thrilling, dialogue ensued. A scene combining rehearsed actors and totally unrehearsed volunteers, in the verbatim context, is risky business! Its intent was to purposely offer a sense of unbalance, surprise and danger for all involved, including the rest of the audience watching from their seats. All were respected and well taken care of. This was essential in order for this scene to work. “Witness as participant” was an underlying theme in the overall piece, as was a desire to offer various perspectives about these kinds of violent incidents. My hope here was to create and embody a more visceral sense of these themes in real time, before heading back into the courtroom of act 3.

The topic continues to be a highly provocative one. In order to keep the conversation extending beyond theatre walls, post show discussions were organized. Our guests included prominent human rights lawyers, Toronto’s Deputy Chief of Police, a former Mayor, well known social activists and Mental Health experts. One particularly charged evening involved a moment of meeting between the widow of the deceased, the Deputy Chief and a former Mayor of Toronto. These and other relationships were forwarded as result of Out The Window.

Without question, this project changed my perspective and practice both as an artist and as a citizen.

Co-produced by The Theatre Centre and The Window Collective